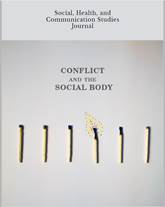 Contexts of the Social Body:

The concept of the Social Body is meant to capture a wide range of phenomena. Examples follow:

Health Sciences: It could mean the biological body which (at least from a sociological perspective) also has social elements to it - how are biological bodies impacted by conflict?

Communication and Culture: The Social Body refers to the ways that bodies in conflict - both individual and social - are represented in television, art, language and other media.